Posted on August 29, 2009 by tolerantamerica

These heroes don’t wear tights or capes. They hardly need leotards to reveal how super they really are.

If you somehow haven’t yet heard, Rabbi Yonah Bookstein is a Jewish Community Hero. And by association–as well as kedushin, children and an inspiring partnership–so is his wife, Rachel. 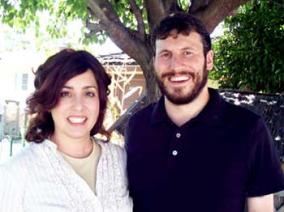 If you haven’t met the Booksteins, this description might sound like an exaggeration. So don’t trust my word alone. For proof of their ability to leap tall hurdles in a single bound, just look to the leaderboard in the Jewish Community Heroes contest. Team Bookstein is currently holding No. 1, with a staggering lead of almost 10 grand. Sure the site only names Rabbi Yonah, but those who have witnessed Rachel in action know the Booksteins thrive working in tandem.

An astounding number of votes have been cast on behalf of this dynamic duo: 17,258 at the time of this posting at the UJC site, JewishCommunityHeroes.org. And thanks to their many friends and supporters, they netted more than 2,000 votes alone in the last 24 hours. What makes these mere mortals so super? Check out this nomination written by one of their students. The Booksteins are “…one of the reasons that thousands of Jews in over ten countries, most recently on college campuses Southern California, are proud to be Jewish, whether it be religiously, culturally, or politically.” The Booksteins founded Jewlicious Festival, “the largest Jewish college student weekend gathering in the country. Jewlicious brings together over 1,000 students from the USA, Canada, and Israel.” They worked for years at Long Beach Hillel until recently relocating to lead JConnectLA. Previously, Rabbi Yonah and Rachel led a remarkable effort helping revitalize the Jewish community in Poland.

I personally have been among the many who have benefited from their heartfelt efforts. I first met the Booksteins while they were running a Warsaw summer camp, where they welcomed my father and me for a Shabbat. I’ll always remember the beautiful respite the Booksteins gave us in the midst of a terribly painful exploration of my family’s roots in Eastern Europe. My father, a survivor of Buchenwald, hadn’t been in Poland since his childhood–when his parents and two of his siblings were murdered and he was enslaved in forced labor by the Nazis. After tefillot, my father told Rachel, “I never thought I would one day stand in Poland leading davening for a group of Jewish children.” Those children, some of them exploring what it means to be Jewish for the first time, were there solely because of the Booksteins and the generosity of the Ronald S. Lauder Foundation, which funded their efforts.

Once they returned to the states, the Booksteins continued working to unite Jews of every stripe. They created “a place where they could come together – Jewlicious Festival. Jewish of all shapes and sizes, from bikinis to black hats, no matter their background, level of observance or affiliation, gather annually for three days of music, innovation, inspiration, connections and creativity. From jocks to hipsters, Ashkenazi to Sephardic Persians, Jews from all walks of life can network and connect with others who have also traversed continents and oceans for the Jewlicious Festival pilgrimage. Because he uniquely bridges the gap between modern and traditional paradigms, Rabbi Yonah has connected himself with Jews from every background, all of which who see him as “their” rabbi. Because he does not have his own synagogue, he is available to anyone and everyone, anytime, anywhere. In doing, so he has energized, inspired and empowered an entire generation of young Jewish leaders.”

Yesterday, in connection with the Heroes nomination, Rabbi Yonah expressed his desire to to continue the work that he and Rachel believe in. That’s because the single winner of the Jewish Community Heroes will receive $25,000 to support their projects. Here’s how he put it:

I hope that you and your loved ones are healthy and well!

A few weeks ago, I was nominated by my former students for the UJC Community Hero Award.

Thanks to amazing grassroots support – we are in first place.

Because of daily voting, caring and persuasive emails to friends and family, Tweets, Retweets and Facebook status posts and shares, we are leading the pack of over 150 candidates in the contest.

But the race is far from over, and I need a moment of your time today to capture 1000 votes in the next 12 hours. With your help we can really secure a steady lead.

Winning this award will build support for Jewlicious Festival and JconnectLA and some of our causes: Jewish unity, connectedness, and innovation.

I hope that you will have a chance to bookmark the following link and use it every day until Oct 6. http://www.jewishcommunityheroes.org/nominees/profile/yonah-bookstein/

Feel free to forward this email on, vote well, and vote often!
Peace and blessings,

Without the Booksteins, this blog, our festival and quite frankly–because of their support of so many artists and Jewlicious presenters like myself–our shared experience of contemporary Jewish life, wouldn’t be the same. So please keep clicking, spread the word and vote here every 12 hours.

P.S. There are a lot of wonderful folks in this competition. And since you can vote for as many heroes as you like, I’d be doing myself a disservice if I also didn’t ask for your support. I don’t want to detract from their crowning moment, but it sure wouldn’t hurt to have more than two women leading the Top Ten. Please share the ‘voting love’ with yours truly here.

On her recent tour for her book, Cool Jew: The Ultimate Guide for Every Member of the Tribe, Lisa was inspired by the inauguration of Barack Obama, the first African-American elected president of the United States, to encourage cross-cultural dialogue about multiculturalism in America. To increase tolerance and understanding across communities, Lisa launched "A More Tolerant America" to feature guest bloggers, authors, activists, artists and other writers, who, like her, are multicultural. Klug's father is a German-Jewish Holocaust survivor from Poland and the descendant of a Spanish Jewish family that escaped the Spanish Inquisition. During her tour, Lisa encountered ignorance and bigotry toward Jewish Americans. As part of her campaign, this blog will giveaway books and other materials that promote cross-cultural dialogue.
View all posts by tolerantamerica →
This entry was posted in Uncategorized. Bookmark the permalink.